A Chaotic Jailbreak Between Two Rookies! Lucy and Chris Meet.

One Dream Voyage 5: A Chaotic Jailbreak Between Two Rookies! Lucy and Chris Meet

It was roughly morning or even noon-ish as the ship continued to cut through the placid waters of the West Blue. With his newly appropriated Marine ship, with which he gained from his newfound Marine friend, Justin, the sailor on board kept up his steady pace as he continued to make way for the Grand Line and his ultimate destination, Water 7. Despite the events that had unfolded back on Gateway Island between him, the Marines and the Slaughter Pirates, Chris seemed as calm and enthusiastic as ever. Perhaps due to being refreshed by his pleasant trip overseas, or even because of his joy over acquiring an island as his territory for the first time. He kept himself located up on deck as he eagerly awaited the slightest piece of evidence that he was either in the Grand Line, or had even managed to make it to Water 7. Not being well versed in navigation made accomplishing his goal all the more harder, unfortunately.

Chris (singing): I think back to the time when my search first began! I left behind those shores of sand! For the endless, everlasting world out there~! I know that with this burning passion driving me, some day, somewhere, I'll finally, see the light I have searched for everywhere~!

Obviously enough, Chris had been keeping himself busy with singing for the time being; possibly due to his good mood. He laid himself out on his back and propped his head up against the mast of the ship; watching the scenery pass him by. His singing voice however, was actually quite remarkable. He not only kept his tone and pitch consistent, but he was also able to raise and lower it accordingly, and even hold a note for as long as was needed. If anything, in contrast to his earlier seen silly antics and his success in battle, his singing actually sounded professional; as if he had been doing this his entire life. Pleased with the first verse for the time being, Chris paused and allowed his thoughts to return to the objective at hand.

Chris: Man, what a nice day it's been. Too bad I'm all alone out here. Kinda boring without someone to play with.

His thoughts then instantly switched back to his long awaited dream ship, and his sought after shipwright to accompany it.

Chris (smiling happily): Oh right! After I get my ship, I'll get a shipwright to take care of it and be my friend!

The excitement intensified within him, and it caused Chris to sit up with gusto.

Chris (grinning): Man, I wonder what other cool guys I should bring with me! I should have an insanely awesome, ginormous crew! With like, 100 people and lots of cannons for my ship! And I'll have really cool animals for pets! And they'll be super strong and rip my enemies to shreds! Tootootootootootoo!

With his excitement continuing to build up, Chris let out an anxious shout to the heavens. In the process, he found himself rising to his feet and extending his arms upward over his head.

Chris (shouting skyward): Hnnnnn-RAAAAAAAAAAAAAAAAAAHHHHHHHHHHH!!! GET ME TO WATER 7 ALREADY!! I WANNA GET MY PIRATE ADVENTURES STARTED FOR REAL!!

Deciding to do something about it, Chris targeted the main mast he had been resting on previously. He made short work in approaching it and relentlessly pummeling it with his fists in impatient desperation, as if it'd make a difference.

He flinched when he heard a noise come from the mast; causing his fists to freeze up in mid-air. He stared in dumbfounded surprise as he saw a crack emerge on the mast; no doubt thanks to his punching. He stood in vacant silence for a while, clearly taking in what had happened.

Then it finally hit him.

The ship however, wasn't so ready to forgive. With a creaking sound and a sudden shift, Chris found himself flung off his feet and tumbling back towards the mast.

The back of his clay head splattered against the wooden frame, whilst his surprise grew.

Justifiably confused and curious, Chris rushed back to his feet, healing the wound to the back of his head, and hurried up to the side of the ship. Underneath the hull, a strong current had pulled it off its aimless course and tugged it in an eastern direction. Not that he understood any of this was happening, but Chris couldn't help himself. He looked over the side and down at the water in bewilderment. Just what had happened that caused his ship to jerk so suddenly?

Chris: Man, that was weird. Did I hit something? Wonder if Justin would be mad at me for wrecking his ship.

As he continued to ponder what was going on, something caught his attention from the corner of his eye. Chris looked off to his side, and then as he got a better look at it, he tilted his head upward and faced the sight before him. What he saw was an upcoming island in the distance, complete with rocky terrain, such as cliffs and the like; as well as a forest of trees elsewhere. Meeting him at the front of the island was a lighthouse; no doubt to help sailors approaching the island at night. Not that it was of any use or even concern for Chris in the middle of the day. Instead, his fixation was directed toward the island itself.

Chris: Oh! Great! An island! Maybe I can get some of my animals there before I head off to sea again!

His enthusiastic tone then switched to a disappointed one as something came to mind just then.

Chris (glum tone and pouting): Though I really wanted to get my ship and shipwright first...

Despite his deepest wishes however, Chris continued to ride the current towards the island anyway. Adventure was waiting for him, and he wasn't going to pass up on the opportunity.

Floating down a current to the same island was Monkey D. Lucy, floating in a hand crafted raft, that had an elegant design; Clearly the work of a master shipwright.

Lucy: It's good to see my rafts are still good.

She looks up to the island smiling broadly.

Lucy: This'll be a good place to bunker down for a few nights, get some rest and build a small ship.

Lucy looks over to see a guy talking to his ship as she was.

Lucy lands upon the island and immediately starts walking to where the guy is going "pull" up but she really knows she might have to save his ass if it comes to that.

Marine: Sir, we have a marine vessel ship coming in, and a raft with a girl on board. What should we do Sir?

The Marine captain looks back to the Marine, then signals him to leave him be. As the Marine leaves he starts to laugh.

Marine Captain: Hope those young'lins don't cause to much trouble. Betta' get to it! Yofofofofofofo!

Chris continued to marvel at the landmass as he drew closer and closer to it. Thoughts of amassing his borrowed Marine ship with every kind of bizarre, unfathomable beast raced through his clay head. As the shore came closer still, he could make out a distinct disturbance amongst the coast. Standing before him seemed to be a figure. He knew it wasn't one of his dream animals, since this person was standing on two legs, not four. He took the few seconds he had left to prepare by thinking of what this could possibly mean.

He then grinned in amusement.

Chris (grinning): Hehe! At least I won't be all alone anymore.

And then, without taking the time to think things through, Chris started backing away from the bow of the ship. The same bow which contained the impact from where Angry Demon had fallen earlier. Walking backward whilst still keeping his eyes locked on the person in front of him, it almost seemed as if Chris was purposefully making distance between them for some reason. Not long after he backed up by a foot or two did he start charging full throttle for the tip of the ship's bow. All this while the ship continued to the close the few inches it had remaining between it and the island. Running at full speed, Chris leapt over the bow and the shallow seawater which separated him from this strange figure before him. He then made a soft landing on both feet as he hit the shore below him. After regaining his composure, he stood upright and faced what he could clearly see was a young woman roughly around his age. Behind Chris in the meantime, his make-shift pirate ship began to finish its casual drift onto the coast itself.

Chris (smiling): Hey! I wasn't expecting to see anyone on this island. I'm Jolly D. Chris, the man who'll entertain the world. Who're you?

Lucy (Confused):' I'm Mo-- Lucy, and I didn't think anyone would be here. I'm the person who'll protect the world. When and how did you get here?

Chris: Me? I just got here.

He points to a Marine ship nearby. After a few seconds Chris begins to look puzzled.

Chris (smiling broadly): I came over here because my ship took me. Then I saw you here and decided to come over to say hi. It's nice to meet ya!

Chris then begins to look puzzled.

Chris (pondering face): Though... what're you doing here? You lost too?

Lucy has a sign of regret on her face; then she looks up to the good looking boy; and begins to smile.

Lucy (getting a little nervous): Well I was just kicked off an island, and I came lookin' for crew mates. There's a small town a small ways from here, want to come with me? Or if you're busy...

Chris: Oh, cool! I thought this place would just be one big wild island with lots of monsters and animals. Tootootootootoo!

After having a laugh at his own foolishness, Chris finally got to the matter at hand.

Chris: Well I'm looking for a place called Water 7, but I don't mind going with you to this town. Could be fun! 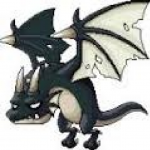