Alfred Martha (アルフレッド·'マーサ, Aflurdo Martha) or otherwise known as the Fondue Fighter (フォンデュー格闘家, Fondeyuu Faitaa?) to most of the pirate and marine world, is a member of the Sujata Pirates and the former Cabin Boy of the New Fishman Pirates. He was introduced during the meeting between Hody Jones and Vander Decken IX. Alfred is a pink Nomura Jellyfish fishman, originally Alfred was one of Hody Jones’s Cabin Boys and helped in the events that took place on Fishman Island. He made a short appearance, watching the battle between Hody Jones and Roronoa Zoro.

However whenever the New Fishman pirates had been disbanded because of the officers being put into jail, Alfred had left Fishman Island. Just days before Mailo Sentir had gone on his rampages throughout Fishman Island. Alfred then had found the Fon Fon no Mi and after eating it. He went on a solo rampage eating anything that he could get his fondue on. Thus eating everything from buildings to even humans and other creatures. Somewhere during these times, Alfred had encountered a mysterious ghost who had appeared before him.

Wanting to coat the ghost with cheese fondue and eat him, Alfred was ready to attack the ghost. But sadly like many other members of the Sujata crew, Alfred was beaten by the ghost. Then shortly after that Alfred chained up, the ghost had offered a deal to Alfred in exchange for his freedom. Alfred having no other chose, he agreed and the ghost set him free. A few weeks later, Alfred had come into contact with Donsai Sujata and after hearing the story with the ghost.

Donsai had allowed Alfred to join his crew and after just a few minutes Alfred fell in love with working for Donsai. Because of the countless things would be able to fight and eat up with cheese fondue on it. With that Alfred’s crimes had earned himself a bounty of

68,000,000 for such crimes as. Being part of the New Fishman pirates and helping the crew with their crimes throughout Fishman island. Then his own rampage, going throughout the sea. Coating everything he wanted in cheese fondue and eating it up, this creating countless damages and chaos throughout these areas. Then joining up with the Sujata Pirates and crew, going on a series of crimes as one of its members. With this Alfred wishes to coat everything and everyone with cheese fondue and eat them up.

Like many other of the fishmen in the world, Alfred is an extremely tall and muscular fishman. One of the taller members of the Sujata Pirates, his whole body is pink and rather a more strange of an appearance than a normal fishman. Alfred has a tentacle like appendage on the top of his head and on the side of his head he has gills. He then appearance humanoid, as during the per-time skip he was shorten that he was before. His outfit had never changed throughout the time skips, he went shirtless and had a pair of black arm guards on. He had a pair of puffy white pants, tuck into a pair of black boots and with a black sash on his waist. However because of his devil fruit powers, many different times he would gain weight and then losing it as fast as he gained it. But during the time he was going solo and rampaging on his own, this was the first time he was seen to be overweight. He had added a purple cape and black vest, changed his arm guards a pair of yellow boxing gloves and boots.

Alfred's appearance during his solo crimes. 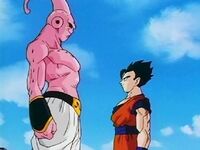 Alfred's Size compared to that of a fully grown male. 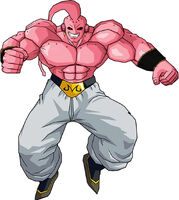 Alfred after his overdose transformation, from the energy steriod.
Add a photo to this gallery

Retrieved from "https://shipoffools.fandom.com/wiki/Alfred_Martha?oldid=198248"
Community content is available under CC-BY-SA unless otherwise noted.