Asparta H. Kyoto, also known as "Wandering Sleeper, Kyoto", is the Captain of the Heiko Pirates, hailing from West Blue on an island known as Xei. Due to his parents not being around too often, Kyoto had to fend off for himself the majority of his time on Xei, to which he had taken the habit of stealing from others. Because of this habit, Kyoto was known around the island as a thief, constantly being ridiculed by citizens and merchants alike. However, not everyone considered Kyoto an enemy, as some were tolerable of habit.

During his time on Xei, long before Trials of the World began, Kyoto took in two children under his wing, providing them shelter and teaching them his stealing abilities. Before his departure, he promised to return to Xei, bringing his crew and a bunch of food, so they could all have a feast together and eat like a family.

The Heiko Pirates are the overall Main Protagonists of Trials of the World, often dealing with infamous Pirate Crews and Organizations that the World Government had trouble dealing with themselves. Because of their actions, they've made several allies, as well as several enemies, making them known well throughout the Grand Line as a powerful crew.

Kyoto is a moderately tall pale-skinned human with short bed hair-like red hair that protrudes in several directions, overall being similar in each area, rather than most hairstyles where one area of hair has more than others. His eyebrows are somewhat larger than most, having a tad bit more hair in those areas than others would. His eye color, however, is vastly different than others, not sharing his eye color, nor scalera, with any members of his family, nor with any other being on the planet. Rando suspects that Kyoto has some type of genetic mutation in his eyes, but they provide nothing special other than a higher sense of vision than others, allowing Kyoto to see further than most. Because of his nature, most of the time Kyoto is shown to have a smile on his face, but his eyelids are near closed, because he is constantly tired.

Kyoto's attire can be considered rather plain compared to most, as he lacks any type of accessories that could augment his appearance, excluding the necklace that was given to him by his deceased grandfather, Rinpaichi Sakusoto. Kyoto wears a red robe that could be zipped up through the middle. The sleeves are rather long in nature, as there are times when Kyoto's hands are unseen to the world, whether he's in battle or just standing still. The robe can also be reversible, as the inside is a different color than the outside, allowing Kyoto to change his outward appearance, if he deemed fit. The robe is also shown to be used a hoodie, allowing Kyoto to protect himself from rain or other things that could come crashing from the sky. For footwear, Kyoto wears blue sandals that are open near the toe area. Around his legs, he wears some type of white cloth that extends from an unknown point to the bottom of the sandals, making it somewhat tight.

After the Timeskip, Kyoto's appearance somewhat changes. Due to the loss of his eyes after the battle that completely incapacitated him, Kyoto's eyes were replaced by eyes created by Rando, to which Hoshi transplanted them into Kyoto's eye sockets. Also, due to this certain battle, Kyoto's body had to go under massive surgery. However, Hoshi knew that keeping him human would certainly bring death to Kyoto, so Hoshi turned Kyoto into a several, bestowing him certain enhancements and abilities, such as being able to split his right arm into two, or being able to detach one of his hands to either display the seastone cords hidden under one of them, or the cannon that another has. Kyoto's hairstyle has also changed, not being the short messy hair he had before, but a longer version that is more contained that covers his right eye the majority of the time. Despite all this, however, Kyoto's usual garb has not changed, preferring to keep it, stating that it's very comfortable, and allows him to sleep faster.

As a child, Kyoto's facial features are similar to those that he had before the Timeskip. His hair apparently has always been messy, having very little care in keeping it contained. However, it is also apparent that Kyoto has a love for robes, because even as a child, Kyoto wore a robe, despite it being colored differently than what he currently has. It was a green robe that had a white scarf-like protrusion from it that covered the area around his neck. 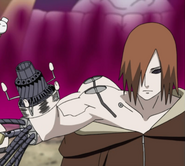 Kyoto under the effects of the Wisdom Capsule

Kyoto under the effects of the Truth Capsule

The necklace that was given to Kyoto by Sakusoto
Add a photo to this gallery
Retrieved from "https://shipoffools.fandom.com/wiki/Asparta_H._Kyoto?oldid=277040"
Community content is available under CC-BY-SA unless otherwise noted.