Asparta Mayoi, also known as "Ten Seconds, Mayoi", is the greatest Doctor of the Imperial Pirates that hailed from West Blue, on an island known as Xei. He, with the rest of the Imperial Pirates, serve as major Antagonists within Trials of the World, wreaking havoc across the globe with their crew, and constantly fighting with those that oppose them, such as the World Government. His parents were former members of a crew that was led by Sui before they died at the hands of an unknown enemy. Due to Mayoi and Kyoto's parents never telling Kyoto that he had an older brother, Kyoto is unaware that Mayoi is related to him for the majority of Trials of the World.

Mayoi is one of the more stronger members of the Imperial Pirates, gaining a high sense of infamy within the Grand Line, being recognized as one of the Eitosutaraitsu, the strongest set of people, aside from Eonzo D. Into himself, within the crew.

Mayoi is a pale-skinned human with longer than normal spiky red-orange hair that protrudes backwards like a porcupine, making it seem as if it defies gravity, despite never using gel. His eye color is much different than Kyoto, even before the eye transplant, having blue eyes rather than the black sclera and brown iris. Under these eyes, however, he seems to have some type of diamonds that people tend to mistake for tears, much to his annoyance. Due to his laid-back attitude, he has constantly been shown to have a smile upon his face, but there are times when he has to digress into a more serious demeanor due to his duties as one of the Imperial Pirate's strongest members.

His typical attire consists of a long black robe that has a long zipper that reaches all the way to the breast area. Near this area, there is a chain that connects from one side of the zipper to the other side, acting as a holder just incase the zipper were to break. Also, due to the robe having a hood, there are strings in which can be pulled so the hood's space can be manipulated. The robe is also long in the arms area, as the sleeves reach all the way up till the wrists, where his hands are covered by black gloves. For footwear, Mayoi wears long black boots that are tight around his legs. Under his robe, it is never shown, but it is presumed he has some type of normal attire, allowing him to discard his robe rather easily if need be. Also, he has a somewhat muscular physique and youthful appearance, seeming as if he's in his teenage years.

After the Timeskip, Mayoi's general appearance does not change drastically, other than the removal of the diamonds under his eyes. Aside from this minor change, however, Mayoi's appearance is the same, keeping the same physical structure, as well as his black robe. 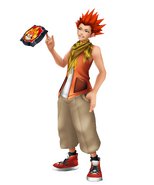 Mayoi as a kid
Add a photo to this gallery
Retrieved from "https://shipoffools.fandom.com/wiki/Asparta_Mayoi?oldid=251416"
Community content is available under CC-BY-SA unless otherwise noted.