Start a Wiki
Baba Yaga (ババヤガ, Baba Yaga) or otherwise known among the marines as Baba Yaga the Buzzard (ババヤガノスリ, Nosuri no Baga Yaga?) and also known as Baba Yaga the Wise (ババヤガワイズ, Wwaizu no Baga Yaga?), because of the fact that her own wit and mind is equal to that of matching Vice Admiral Tsuru herself. However current Baba is a rear admiral stationed at Marine HQ and she also has been given the task of over seeing the up keep of the marine’s bases throughout the world. Originally whenever she was very young her own parents were pirates and as such she was born into the life style. She was a famous little criminal back in the day, she was firstly a member of her parents crew. But whenever her own parents were put into prison for the crimes of piracy and such.

She had then turned 18 and decided to start her own crew with the former members of her parent’s crew and some new recruits. She then was the captain of the Baba Yaga Pirates and for several years until she was close to her early 40’s at this time, she herself now was famed throughout the world. She had made countless allies and one her most famous was Charlotte Linlin and the Big Mom pirates themselves. For several years these crew had done business together and committed countless crimes. Baba had gained countless fame and was feared through all of the blues, but mostly in the West since she originally was from there.

She had earned herself a bounty of

330,000,000 for such crimes as, her being a member of her own parent’s pirate crew and the countless crimes that had been committed as the cabin girl of the crew. Then after her parents capture, her own formation of the Baba Yaga pirates and the crimes they had committed. Such as raids on several different villages, towns and islands, capturing a marine protected island and running it for some time. Taxing the citizens out of all of their gold and close to a ten year tyranny over these places until she was taken over by the Big Mom pirates. Then starting an alliance with the Big Mom pirates and thus committing crimes as allies, such as their joined attack on several marine bases and other government structures. Baba’s most famous crime is the defeat of Vice-Admiral Strawberry who at the time was a rear admiral.

But some where along the line, Charlotte Linlin seemed to have screwed Baba over and cut their alliance off. Many believed it is because of the fact that Baba didn’t give her payment of candy to Charlotte and as such she just cut of their alliance. But after that she seemed to went on for a few more years as a pirates and after watching Roger’s execution she set out to go looking for one piece. But after close to five years of searching up and down the grandline, she gave up and was captured by the Marines. Brought before a special council of mairne officers, they had made a deal with her. If she was to join up with the marines her record would be wiped cleaned, since she herself was one of the last great pirates in the old generation left. The marines wished to have her on their side to give them knowledge of the pirate world and such. As of now Baba had went up the ranks and now is a rear admiral, placed in charge to go from base to base inspecting and currently is one of the treasures of the marines. With this Baba Yaga sets out to get rid of all of the pirates and take her revenge out on the Big Mom pirates for screwing her over.

Baba Yaga is a big and massive woman, she is one of the tallest among the marines (not including the giant squad. Baba Yaga is an elderly woman, with a big head, nose and eyes. Seemingly her body is not really proportion correctly, she had thick and long fingers, with even longer red nails. Having a big wart on the middle of her forehead and wears heavy make up. On each of her fingers she wears countless rings on each finger, expect for her thumbs and left pinky finger. To tell of her age Baba has a great amount of wrinkles on her personage. She has dark brown eyes accentuated with purple eye shadow as well as a very large and prominent crooked nose. She also wears golden earrings and several necklaces. During her days as a young pirate she seemed to be a bit smaller with long bright blonde hair that she had kept up in a big bun. She had worn a long blue dress, with black fringed on the ends of lace and cloth. Over the years her outfit didn't seem to change just her age and hair color from a blonde to a pale gray. But she had added the marine officers jacket which is hanging from her shoulders, like most of the other marine officers do. 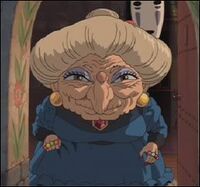 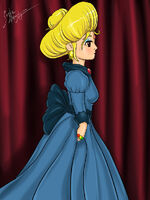 Baba Yaga in her younger days. 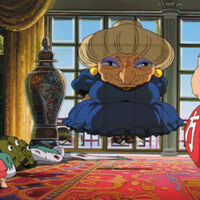 Baba Yaga whenever she was first being introduced.

Baba Yaga smoking on her favorite brand of cigarette.

Baba Yaga having tea with some representatives of the Big Mom pirates.
Add a photo to this gallery
Retrieved from "https://shipoffools.fandom.com/wiki/Baba_Yaga?oldid=253064"
Community content is available under CC-BY-SA unless otherwise noted.