Barry Anghel Cordes (バリー•エンゼけル•コーデス, Barī Anzekeru Kōdesu) is pirate and former hitman of Marines. He is the second mate of Illusion Pirates and the third member of the crew, but join officially as fiveth member. He has eaten the Sharedo Sharedo no Mi. By killing single handedly rear admiral, he earned a bounty of 221,000,000, before he was member of Illusion Pirates. He is second best fighter in crew (as well the second weirdest), after Michael Roomheath, his captain.

Barry is a tall, skinny and pale skinned man who has dark orange shaggy hair, that looks like scarecrow hair, and covers his ears. Before, when he was part of the Marines he did have long black hair. He also dosent have eyebrows or pupils.

He wears stereotypical mime clothes containing some bat like features. He wears black and white striped shirt which sleeves are rolled up around his elbows, flared black pants, accompanied by a thin black suspenders and white gloves. Then he has black shoes, that have grinning bat-heads on tip of the them and on sides small bat wings, red bowtie, that has short bat like wings and a bowler hat, which domes band is crimson red. And as the real mime, he also wears white face paint and he also has a black stripes above and below to his eyes as well as red colored lips, same red as his bowler hats band. 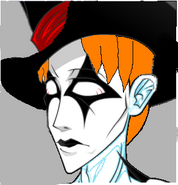 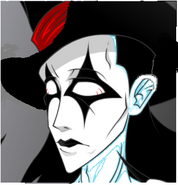 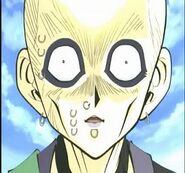 Young Barry close up.
Add a photo to this gallery

Barry has been said to be very bizarre person. Mostly because his way to keep his hands in mime position, like his touching invisible wall and never puts them down, even in his sleep. Even while eating he uses only one hand. He has also habit to stay standing somewhere strange place and if someone pours him to the ground, he will stay lying on there. Ongoing joke is that Barry dosent move, so he is usually mistaken for dead, or a statue, which often puts him in some sort of trouble such as been taken to funeral home and getting almost buried alive. Michael suspects that that it is due to the fact that he does not remember that he is alive, or just because he loves birds and wants them to come to him. He has also habit of sometimes go stand in front of person that is maiking a speech.

He is also a great love for bats, which is reflected from the very fact that he likes to hang upside down from ceiling. Even while eating, he hangs from the ceiling and always gets every place through the roof without anyone knowing how he does it. And another thing is that he is completely mute, and is unable to say even a single word or even to make the slightest sound from his mouth. That is why he is taught his pet parrot to talk, although most of their time its talk only perverted thing.

Barry is a very talented animal trainer, which occurs very fact that he was able to teach his pet parrot to speak, without that he himself didn't say a single word. But only down fall was that parrot did learn how to swear and say perverted things.

Barry ate the Sharedo Sharedo no Mi, a Paramecia Devil Fruit which gives him the ability to "mime" all kinds weapons and though the weapons may not be real, the pain they make to persons body is.

Who your character fought against

Retrieved from "https://shipoffools.fandom.com/wiki/Barry_A._Cordes?oldid=174151"
Community content is available under CC-BY-SA unless otherwise noted.