Big Mama (大きな儘, Oki Kaka) or otherwise known by her real name, Lisa K. Jaiser (リサ·カイザー, Lesaa K. Jeisour) is the owner and operator of the Big Mama's House bar and club. She is rather an out of the way woman, who offers her help to any pirate or civilian needs it from Marines and other antagonist figures.

Big Mama is known throughout Loguetown as an information broker and offers her own info at a price of course. Originally Big Mama was a close acquaintance of Gol Roger and seemed to have a crush on him during her younger days, however on the day of Roger’s execution. She had broken down into tears seeing him being walked to his death, as she then only watched as he was executed.

Since then, Big Mama had gotten ownership over the bar from her own mother. Since then she had met several pirates and others, which she had helped out through the years. One of her most recent cases were with Spade and his crew.

With a bounty of

30,000,000 for such crimes as, aiding and boarding crimes and pirates from the law. Her own set of crimes as a young pirate and then stealing from a noble to gain a foot hole for her business. With this Big Mama sets out to stay in business and make as much money as she can for her bar.

During her younger days and whenever she was in her mid 20's. She had long black black hair that she kept down and neat, she had blue eyes and a big bust. She had a tattoo on her lower left arm that was The Roger's Pirates own jolly roger, showing her own support for the King of the Pirates. Her clothing was rather revealing and tight. She had a little green colored leather dress, with a pair of black high heeled shoes and a black fur coat on.

During her pirate days she had wore a red button up shirt, unbutton to the point that it showed her own bust. She had a black bandana with Gol Roger's own jolly roger on it. She had a black captains hat, with a blue feather comming of the end of it. She had a pair of a pale green pants, high heeled boots and with a sword on her hips. Tied off with a purple sash, beads hanging from her sash and to complete her outfit she had a fur jacket over her shoulders.

Whenever he had grown older into her 60's and her current appearance. She seemed to have age and had a calm or stern look on her face. She has become more obese, her hair was shorter but still kept her black shine to it. Often she is seen smoking on a cigarette or cigar, she has a string of pearls and gold necklace. She now has a red dress on and a black fur coat, with a pair of high heeled shoes and often is seen wearing a pair of long armed gloves. 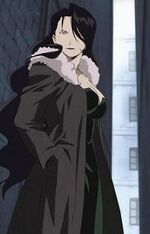 Big Mama during her youth, watching Roger's Excution.
Add a photo to this gallery
Retrieved from "https://shipoffools.fandom.com/wiki/Big_Mama?oldid=174160"
Community content is available under CC-BY-SA unless otherwise noted.