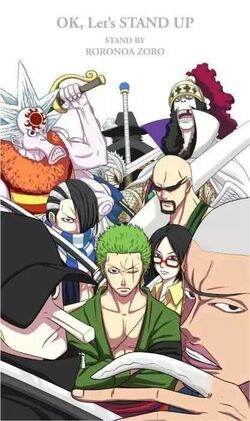 This category is for articles about characters who not only wield swords, but are worthy of being named a Swordsmen.Think you can join this impressively skilled bunch? Or do you just want to tag along and gain fame being among them?

To classify, a swordsman or swordswoman is a person trained in the art of the sword. Plurally they are referred to as swordsmen, swordswomen or (mixed gender) swordspeople.

Nearly every crew and organization has a swordsman in it. A skilled swordsman is a valuable asset to a crew, and swordsmen are often found in positions of high respect, such as a first mate or even the captain.

Swordsmen from Wano Country are referred as "samurai" (侍, samurai?). Participants of Corrida Colosseum are known as gladiators (剣闘士, kentōshi?), warriors trained in shields and swords. However, this only applies to participants who are actually trained as gladiators, as any other participants do not necessary require a sword and shield to be referred to as "gladiators".

"
'
A
B
C
D
Next Last
Community content is available under CC-BY-SA unless otherwise noted.
Advertisement
Follow on IG TikTok Join Fan Lab