Start a Wiki
Cosmo D. Cheshire (コスモD.チェシャー, Cosmo D. Choukinshi) or otherwise known as the Cheshire Cat (チェシャーキャット, Choukinshi Neko?) or to many members of the Cipher Pol as the Black Hat (黒側 Kuroshpo?), is partnered with Logan Daisuke within the Mafia Pirates. He also seems to be the keeper and is the master of Cosmo Jr., his long favorite doll from his child that he had brought to life, through the use of an unknown Paramecia-type Devil Fruit. Originally Cosmo was part of an experiment that was put into affect to see and trying to create a soldier that wouldn’t feel any emotions whenever they must kill an opponent. Through a series of injections and other gruesome tests, but sadly the tests have gone wrong. Thus back firing and now leaving Cosmo as overly cheerful freak, seeing this. The group had agreed to put Cosmo into Impel down in their asylum wing and for a long time Cosmo sat there rotting away.

Until he was visited by a mysterious man, who the time was a Cipher Pol agent. He had heard of the Cheshire cat Cosmo and wanted to see him from himself, after a few exchange of words. Cosmo was set free and after being presented with a suit he joined the Cipher Pol, who at the time Logan had just joined as well. It would have appeared that the two became quick friends, since they both shared similar views on life. But as Logan began to bore of being a member of the Cipher Pol. Wanting to be impulsive and adventurous, Logan and Cosmo had broken away from their division. Thus the two had become bounty hunter and assassins as a side job, as they themselves began to form their own crew. However this crew had not worked out and thus ending to its disbandment, but it would have seemed that Cosmo and Logan had kept their partnership. After turning to piracy they began to form their own underground crime organization, which had gone high for several months and until they were found out.

Thus having both the marines and CP9 themselves stepping in and putting an end to Logan and his schemes. However Cosmo and Logan had managed to escape, leaving all of their followers and subroutines behind and the two alone again. They had come across another pirate crew that caught their eye, the Mafia Pirates that was lead by a man by the name of Shuji. Hearing of how he and his crew wanted to become the strongest pirate crew in the world, both agreed in seeing wanting to join. So after meeting the Mafia crew and Shuji himself, Cosmo had become one of the elite members of the crew. As of now Cosmo has been said to be the scariest and creepiest member of the crew, popping out of nowhere.

Cosmo has been said to be one of the most unstable experiments that the world government had ever covered up. Thus why he has a bounty of

450,000,000 for such crimes as. Being an unstable experiment and a failed one at that, if he was to go into the public eye he would have brought a great deal of chaos to the world government. Leaving the Cipher Pol organization thus taking several of the secrets with them and avoiding capture by both the marines and the organization itself. Becoming a pirate and turning to piracy for a short while, then Logan and Cosmo starting an underground crime circle. Escaping capture whenever the group was taken down and leaving all of his followers behind to be arrested. His own crimes against the world government and sneaking into homes, breaking and entering. His most famous crime is his battle with the Weapons Core with a four one battle against them. With this Cosmo sets out to explore the world through his new bright and cheerful eyes, that the nice world government scientist had given to him.

Cosmo is rather a tall and skinny man, he has extremely pale white skin to that of an albino appearance. He has bright purple-pink hair, which is cut similar to the same length to Sentomaru's own hair length. Most of the times he will be seen with a long cat tail and long claws, which he is in a hybird form of his devil fruit. During the per-time skip, his hair was a light green and his skin as white as ever. He wore a brown top hat, he had a pair of brown pants that go just above his shins. Then a pair of green socks that went up the length of his leg to his knees and a pair black pointed boots. He wore a white shit and a over this a green button up vest and a brown suit jacket over this. Then after the post-time skip and his current out, nothing much has changed but his hair from a green to a light pink and his suit now is a black and white scheme. 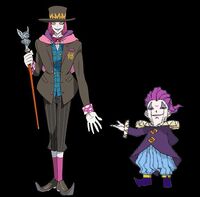 Cosmo and Cosmo Jr., along with their size compassion.

Cosmo in his cell at Impel Down, when he was first introduced.

Who said personal space was important!
Add a photo to this gallery
Retrieved from "https://shipoffools.fandom.com/wiki/Cosmo_D._Cheshire?oldid=174217"
Community content is available under CC-BY-SA unless otherwise noted.