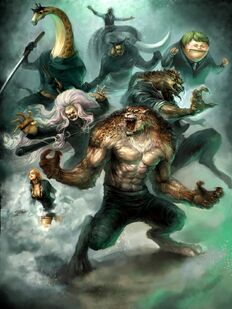 For more space or discussion, please go to the Forum:Devil Fruits page.

Rule 2: No Devil Fruit may be blatantly overpowered, and must pass what is known as the "Marineford Test", meaning a person can not simply defeat all of Marineford alone with only his or her fruit.

Rule 1: Natural elements only (meaning no man made substances such as perfume are allowed). Plant matter acceptable, human/animal matter is not yet acceptable such ass blood, hair, or snot, nor are made up things such a "pink wool".

Rule 2: Made up particle logia can be made, (though not recomended), provided the properties are explained in detail and make sense.

Rule 3: An element needs to have enough differences in properties from anything similar to make it unique-ish, meaning a Gold Logia, and a Silver Logia cannot both exist, given that Silver and Gold are essentially the same thing, albeit the color.

Rule 1: One may not create a Zoan of a made up animal, only real life animals, which are currently still around or extinct, as well as mythological animals. Depending on which, the Fruit must be properly categorized under "Zoan" (Like a Tiger), "Ancient Zoan" (Like a Dinosaur), and "Mythical Zoan" (Like a Phoenix).

Rule 2: One may not create a God based Mythical Zoan which is omniscient, omnipresent, or omnipotent, with complete immortality and the inability to be killed. For example, one may hypothetically create a mythical Zoan of Hyperion, however when creating this Zoan, he or she is not allowed to be immortal in any way, nor omnipresent, or omnipotent. They are however allowed to grant the fruit the ability of simple light production and manipulation, as well as basic Zoan transforming.

Rule 3: The create a Dragon Zoan, the Dragon must be from a real myth, and can not be made up. However, this rule was made after a plethora of fake Dragon Zoans were made, so it is viable for someone to use one of those old ones. Along with this, one can alter the name and power of one of these old dragons Zoans, so much as that they don't make the fruit's abilities entirely different. For example, one could have a Fire Dragon Zoan, and change it to a Heat Dragon Zoan, however they could not make it an Earth Dragon Zoan.

Rule 1: No fruit is simply allowed to have combination powers, a clear common thread. The Ope Ope no Mi allows Law to multiple things, along the lines of like Law has teleportation, telekinesis, sensing, cutting, sticking, electrocution, and radiation poisoning. All of these abilities are granted within his room and have one common thread, an "Operating Room". One may not simply create a Paramecia which grants the consumer the ability to have super strength, manipulate fire, invisibility, teleportation, eye beams, and ect, without a common thread and explanation.

Community content is available under CC-BY-SA unless otherwise noted.
Advertisement