Born as Ignis D. Rikushido, his name was changed by his mother at a young age to protect him. Due to this, he is popularly known as Riku Xanthe.

Riku is an nineteen-year-old Infernal who set out to become a pirate, driven by his goal to end his father's life.

Riku is an expert dancer, and a professional illusionist. Riku is also the Sailing Master, Navigator, and Cartographer of the Poppu Bando Paire-tsu (Pop Band Pirates). As such Riku is one of the main protagonists of One Piece of Music.

Riku managed to obtain a bounty of

100,000,000 at the age of seventeen, which ultimately granted him the title of gurentaika by the Marines and the press alike. This bounty has also bestowed upon him the title of "Super Rookie".

Riku is a prodigy, becoming a wiz at anything he sets his mind on. Whether it be fighting, or academics, he excels past mostly everyone, finding even quantum physics simply a game. Riku is extremely analytical when it comes to battle, despite having a tactician amongst his comrades, he himself is very logical, and cunning in a battle, using this to his advantage, along with his great physical capabilities.

Riku is also known for his BURNING hatred for Nobles and those who act like them. Which is the reason he has a disdain for Magnus and Decaden. Riku also dislikes simple minded folk, though there are some exceptions. Much like Haku, who he can easily tolerate, despite being annoyed by his "idiocy".

Riku is also massive pervert. Unlike other perverts, Riku uses his clever thinking and cunning into pleasuring himself, even going as far as hiding himself with but an illusion to peep on the girls bathroom.

Riku also admittedly has a great fondness for kids, which he refuses to hurt. He himself also has a great hatred for those who hurt kids. Due to this fondness, he has taken a great liking to Creeper and Pier (despite the latter being over eighty years old in mentality, and the former being physically over 80.)

It should also be noted, that Riku is of the few analytical and intelligent crew mates.

Riku is a Martial Artist. Due to this, and constant training as a child, Riku is extremely powerful. Both physically, and mentally. Riku focuses on martial arts that revolve around kicks and or leg oriented. This is due to his extremely strong legs.

Riku is both extremely fast and powerful, however what makes him so deadly, is his accuracy. His strong legs have the ability to easily kick a grown man's head in if he is not careful. His speed is blinding. Though his natural speed is not as fast as Pier's, he comes at a close second. Being able to seemingly vanish when traveling. This momentum when he kicks makes him even more deadly.

Riku's physical strength is top notch. Riku as been shown to easily kick people down, crippling them for life in a single shot. What makes him even more dangerous, is the fact that he can even increase the power by kicking at extremely high speeds.

Above all else, Riku is a MASTER illusionist.

First and foremost, Riku can use the hypnotic movements of Enchantment to visually disorient his foes, making it extraordinarily difficult for his foes to keep their sigh focused on him. Riku can also augment the agility of his Enchantment with his Kami-e in order to make his movements FAR more disorienting than before AND phenomenally decrease the chances of his hypnotic movements being interrupted through any means. Kami-e will also allow Riku to nigh-instantaneous shift from hypnotism to offense and vice versa, making it almost impossible for anyone to take advantage of the short interval of no disorientation that is created when Riku goes on an offensive.

The next step up from Enchantment is Riku's vocal mimicry and his ventriloquism. Riku is fully capable of mimicking the voice of anyone he has ever heard and just about anything he has ever heard as well. To make matters worse, Riku is also capable of throwing his voice as far as a mile away. A combination of these two skills allows Riku to create audio for any of his optical illusions, making them seem all the more real.

Third is a result of Riku's nature as a scientist. The Puluere Illusio is a psychedelic powder of Riku's own chemical design. The powder causes those that inhale it to immediately begin to experience hallucinations at a near-constant frequency. The very presence of such hallucinations tends to make a foe want to accept the more realistic of Riku's illusions with greater fervor than usual, thus allowing Riku to deceive them with much more ease than before.

Last but most definitely not least is Riku's Devil Fruit, the Orora Orora no Mi. With the Orora Orora no Mi, Riku can conjure images seemingly out of thin air. It also allows Riku to literally BECOME an optical illusion himself, further blurring the lines between reality and fantasy. Most of those who are unfortunate enough to combat Riku at this stage are unsure of whether they're attacking Riku, an illusion, or Riku as an illusion. The confusion makes it flat-out IMPOSSIBLE to harm Logia Riku with Busoshoku Haki alone, as it would require Kenbunshoku Haki to ensure that one isn't attack any one of Riku's other illusions rather than Riku as an illusion.

Riku was born on Sahara Island. He was born into the Noble Caste much like the rest of his family. Riku however much like his twin, despised Noble-hood. Due to Riku and Hiro eating devil fruits, and their father's race, they were despised and hatted by their people. Come their eighth birthdays, their home was ransacked by bandits and burned to the ground. In the process, Riku and Hiro's mother died in their arms.

Riku left Sahara and dreamt of becoming the world's greatest Martial Artist. Learning the ways of Rokushiki and Enchantment from his Uncle. Riku got stronger as the years progressed and he learned to to utilize his Devil Fruit's powers.

Riku ultimately started traveling the world in order to get stronger for one sole reason: To find his father and defeat him. His reason was to understand why he left Sahara and why he killed his own wife. 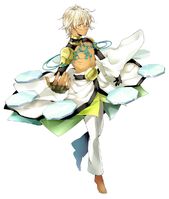 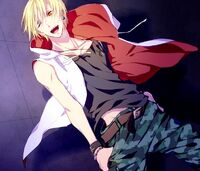 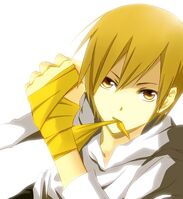 Riku readying up for a fight. 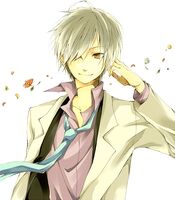 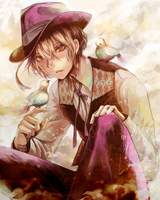 Riku demonstrating his love for animals. 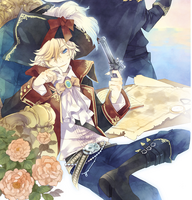 A bored Riku.
Add a photo to this gallery

Retrieved from "https://shipoffools.fandom.com/wiki/Riku_Xanthe?oldid=267406"
Community content is available under CC-BY-SA unless otherwise noted.